This is a quick little project I have been thinking about for some time now. Back in December (2019) we had a family trip to Disney for my daughters Cheer competition. For the 17+ hour trip I purchased the audio book "A Higher Call" by Adam Makos. I had been on a kick reading all kinds of books about the B-17's during WWII but this one really opened my eyes.

I'm sure many of you already know the story but for those that don't, without giving away all the details, the story is a bout a B-17 crews first combat mission over Germany. The crew was using a B-17, "Ye Olde Pub" who's former crew had completed their missions and had rotated home. Five days before Christmas in 1943, over the skies of Germany, Charlie Brown, a 20-year-old farm boy from West Virginia, encountered Franz Stigler, a 29-year-old German flying ace.

Brown, the pilot of a B-17 bomber with a crew of nine, was on his first mission over Germany. Stigler, in his Bf-109 fighter, already had scored 22 "victories," or kills of enemy planes.

Brown's plane, nicknamed "Ye Olde Pub," could easily have been No. 23. It had been damaged so badly that its guns no longer worked. The four-motor plane was limping along on only an engine and a half. 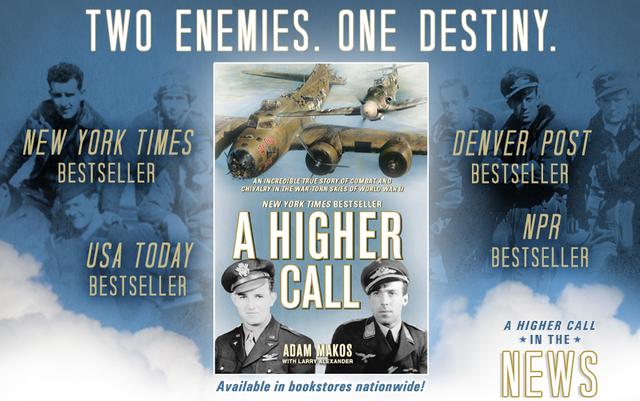 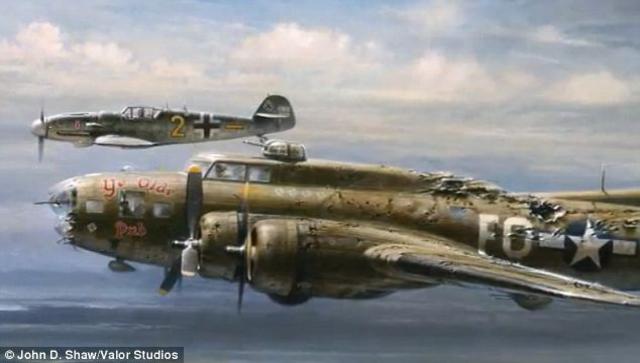 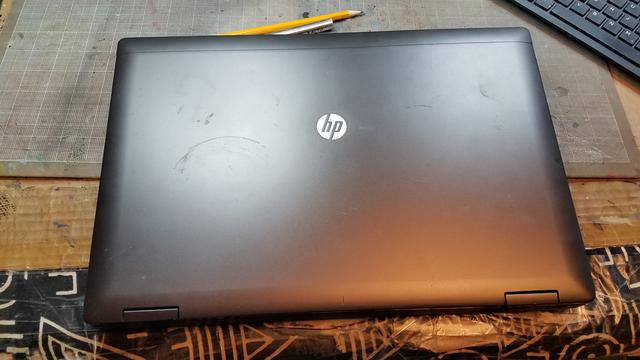 After cleaning the surface, I marked a panel line which I will use as a reference point. I also drew 4 rivet lines. I scored the laptops case using my Tamiya plastic scribing tool 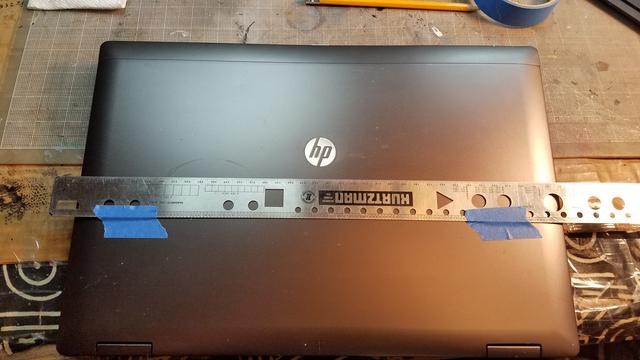 To represent rivets I used some "Wiggle" eyes. They are a bit over sized but this is not an EXACT replica of the B-17 but a tribute to it and its crew. 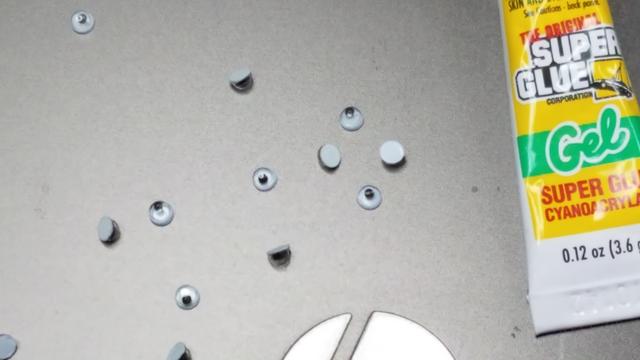 These were secured using super glue I got from the dollar store. These were glued before any paint was added. 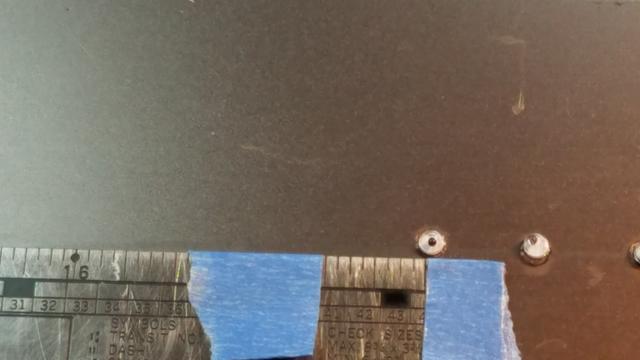 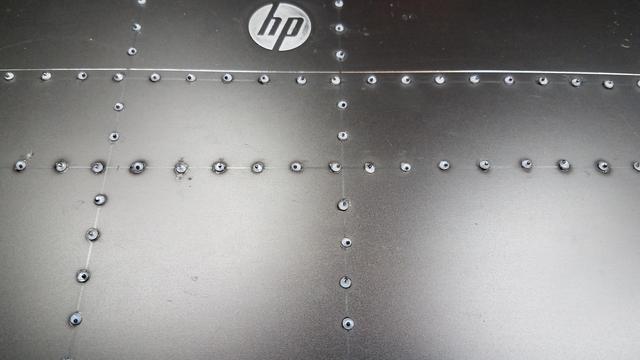 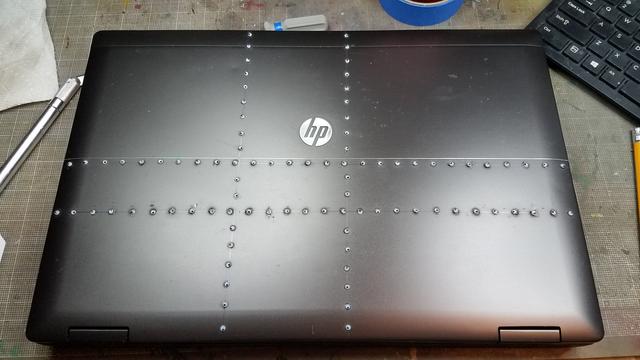 Next was primer and paint. Both of which help lock the wiggly eyes in place, but first I wrapped up the entire laptop to prevent any over spray 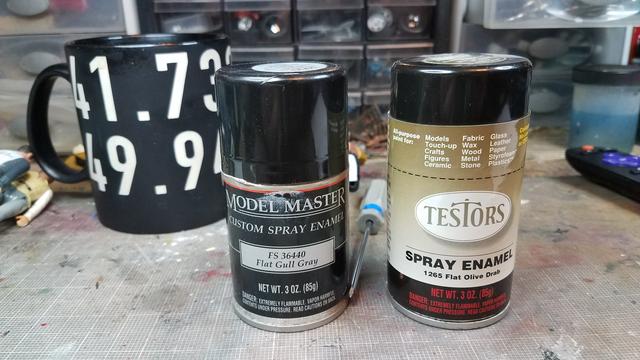 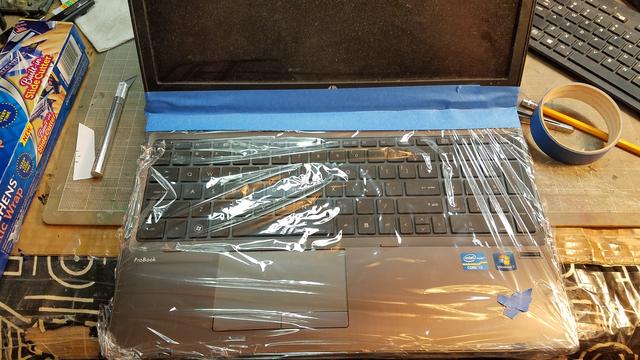 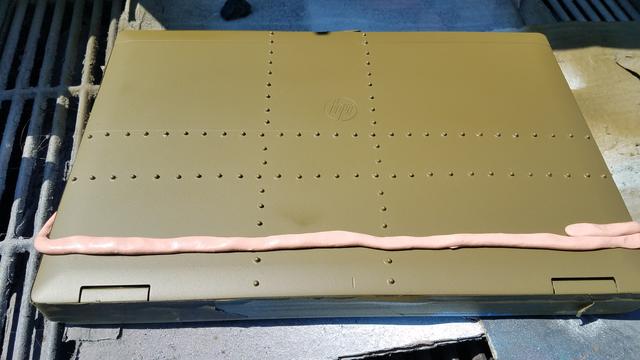 Once the Olive drab was in place and dried I use silly putty to mark off the area for the Neutral Gray. I then wrapped the top half off using plastic wrap to prevent any over spray 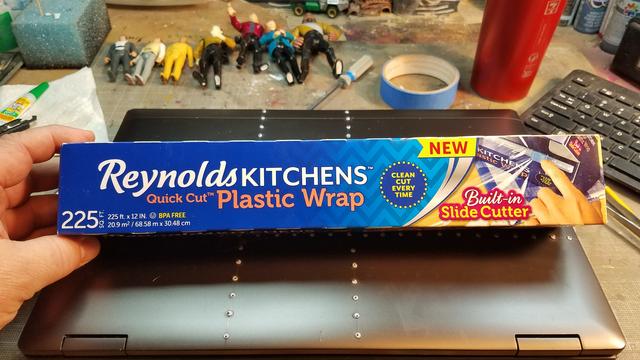 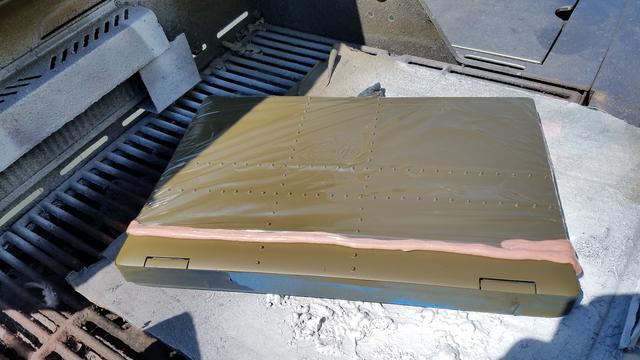 I found this online while searching for the correct font. It was almost perfect so I decided to use it. I resized it to fit the laptop and cut out the letters to use as a template 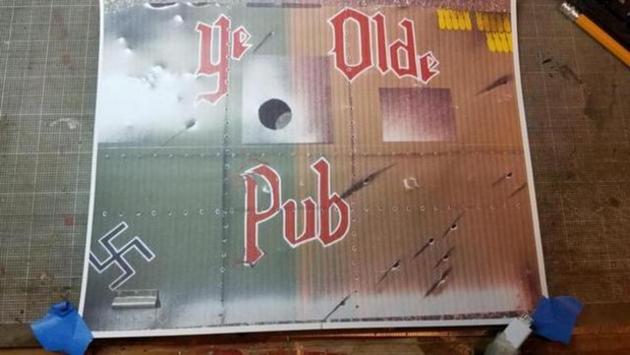 Before I could use it I had to modify the "P." The proper "Swoop" at the top of the P was missing. 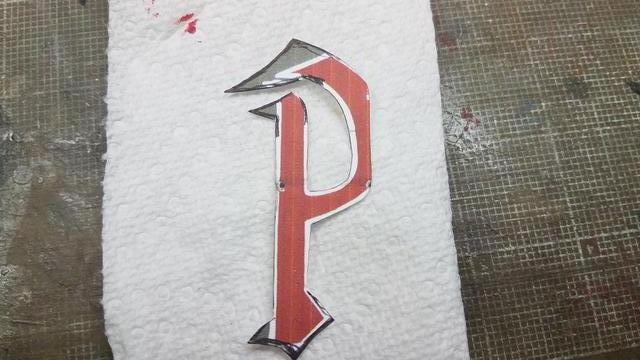 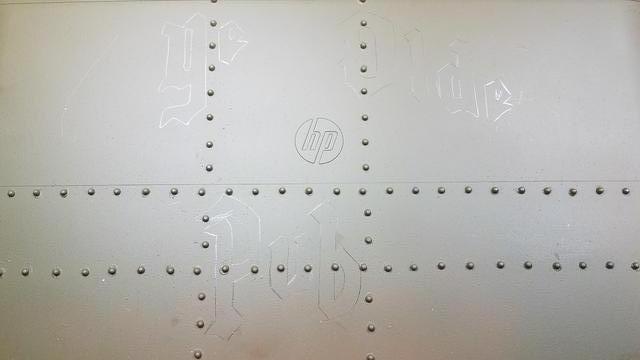 Using a paint pen I outlined the letters 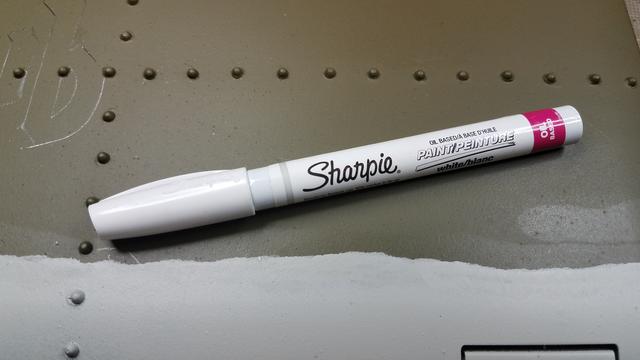 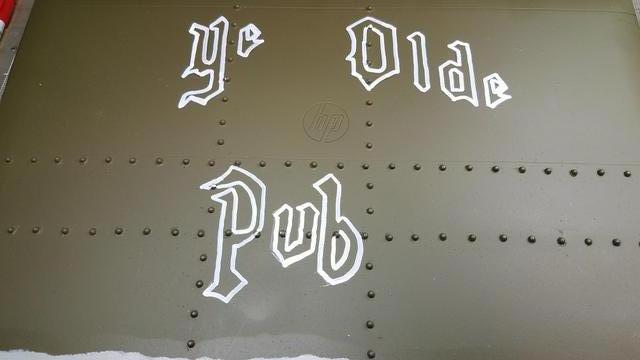 After giving it some thought I decided to color in the letters with the white. This would reduce any change in the red when it goes on and over laps the white. 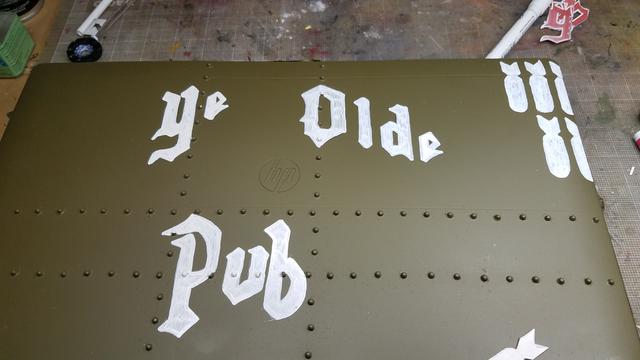 I also added a couple mission markings for added interest 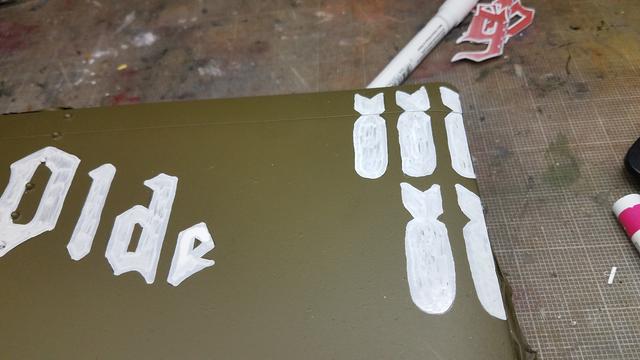 Once the white was dry I took out some craft paint and set to work. 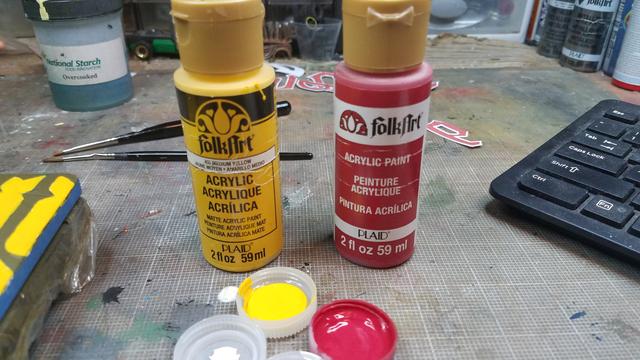 I'll take a pause here, and will return with the rest of the project shortly.

Thanks for taking the time to look at my project.

Till next time... Stay safe and B - Strong

Staff member
This is very cool!

Kenny Conklin said:
This is very cool!
Click to expand...

Ok so when we last left off, we were waiting for the underlying white paint to dry so that we could start with the final colors. We will be using craft acrylics for this. Ye Olde Pub will be Engine red from FolkArt and the mission hashes will be Medium Yellow also from FolkArt. I could mask it all off and airbrush it but when these birds were first marked they were all done by hand so I felt that this should also be done by hand

Now that its all painted and dry we are going to give it a coat of flat clear to seal it all in. 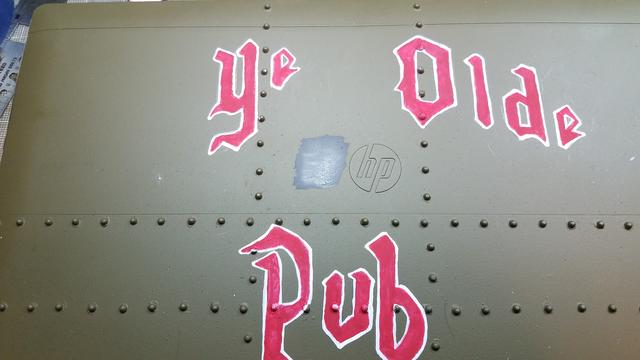 Now its time for the cheek windows. I could have painted these of but I wanted to add more depth and interest to the over all look. So I decided to make some actual windows which would stand out against the rest of the nose art. To do this I took the lid from a dollar store disposable food tray. Any food tray cover would work. 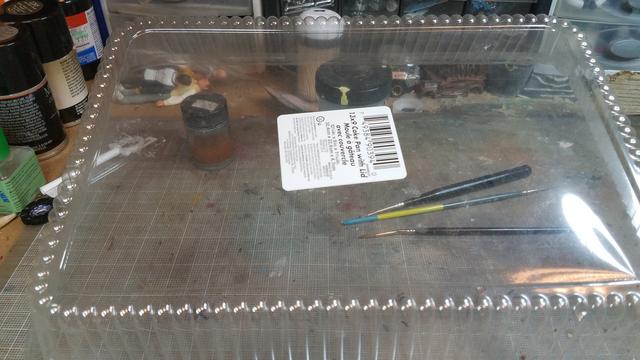 I cut the windows out and painted the back of them black. The painted sides will be glued to the laptop leaving the shiny unpainted side forward facing. 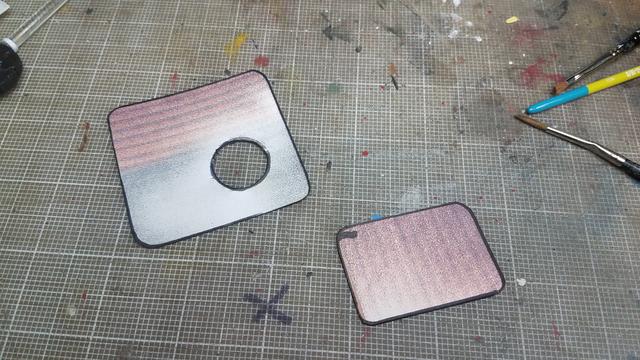 The templates traced out onto the tray cover. The circle indicates where the 50 cal machine gun would be mounted. 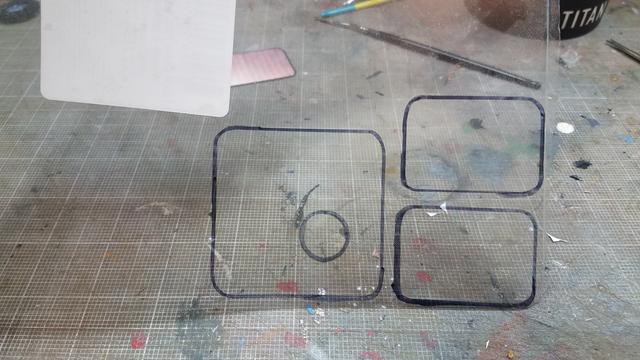 While the windows are drying its on to some weathering and battle damage. I laid out where I wanted some bullet holes and then using my dremmel and a diamond bit I set to work making the holes. being careful NOT to go all the way through the magnesium cover and damaging the LCD screen or wires beneath. With the holes in place I used some model masters steel and made some chips in the paint. Then I filled the bullet holes with Tamyia smoke. I let it sit for a bit them used a dry brush to spread the smoke. The original nose art also had a swastika painted on it but due to the over sensitive nature of people today and because I still take this to work I felt it best that I omit it from this build. Maybe someday when I retire this laptop from service I will put it on but for now its best left off. 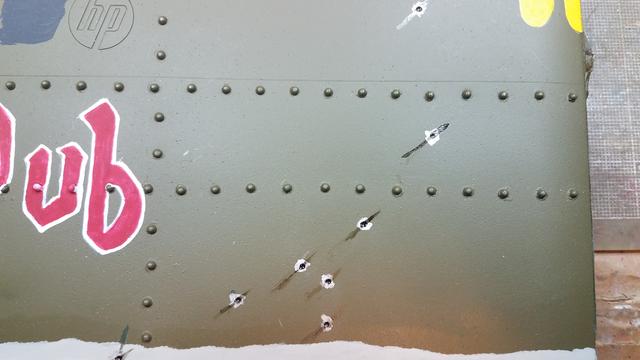 And there you have it. It should bring some interesting conversations up when I take it with me to those all day conference meetings where everyone is sitting around the table. It'll be my chance to spread the story of Charlie Brown, Franz Stigler, and the crew of "Ye Olde Pub." I can't recommend this story and book (A Higher Call) enough. I learned so much from this book. I've now read it three times since December. 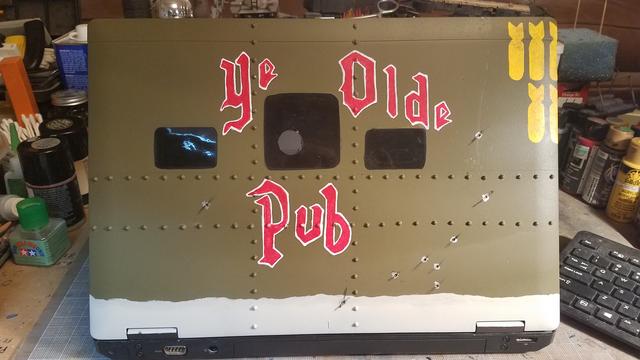 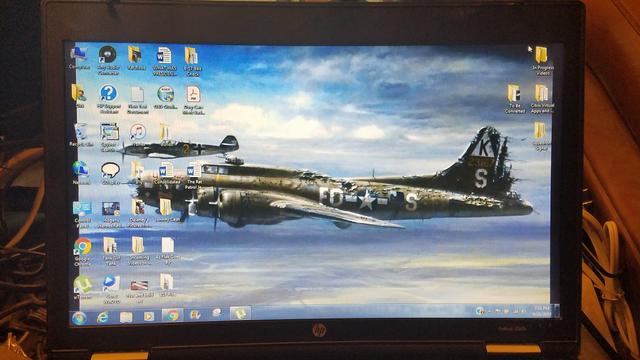 Thank you to all for your time. Till next time... Stay healthy and, B - Strong

Staff member
That is really cool and you definitely have made an outstanding conversation piece.

Kenny Conklin said:
That is really cool and you definitely have made an outstanding conversation piece.
Click to expand...

That is has, to bad we don't have meetings like we use to anymore thanks to this new Covid world. So no one will ever see it.

Thank't Don. I already have a second one in progress. This one is for another iconic B-17 Knockout Dropper from the 303rd BG of the 8th Air Force