Back in 1992 the First Time I heard of Halcyon Models was when I spoke with one of the Boys who worked in Beatties Model Shop as a Sales Person. He was raving about a New Model that was going to be on Sale and that he had ordered one and if I wanted one I would essentially have to pay a deposit for what we universally know now as a pre-order. That Model was the USCSS Nostromo, the vinyl and styrene injection moulded model kit. She was supposed to have brass accessories but alas that never happened! That Model then cost me a Princely Sum of £88.00, cheap in retrospect considering what the Collectors Price She Commands in these days! Anyways I thought to myself if there is a Nostromo Kit this Company has release a Narcissus? And I was right! I saw the preview and build up in Tamiya Magazine of both kits and could not wait. I bought the Nostromo, feeling pleased, but a bit stunned at the amount of money I just spent- on a Model Kit? If certain members of my family found that out I would have had a stiff talking to! But alas I kept that expenditure to myself! But as always I Digress!

Putting my order in for the Narcissus was tummy churning as I had always loved this design and had often wondered why it had never been produced up until now? Licensing as we now know was probably an influencing factor? I the day came when I got the call and I could not get to store quick enough! I was so eager I had to look in the box. Yes there are some details that could have been routed out but the bulk of the design was there for me to be smitten! She was back then the Best, the Only Representation of this on screen Beauty! While the production and modelling crew called Her Miss Piggy- the Bow Thruster Assembly Being Reminiscent of a Pigs Inglorious Snout, I always found there to be a romantic aesthetic to the design. Practical, Rugged and Beautiful.

I wasted no time when I got home. The only disappointing feature of the kit really is the interior as there is plenty of scope for one to be included especially the cockpit. But the canopy is tinted so I didn't worry too much. The model is really quite simple consisting of two Hull halves and Four Detailed Hull Plates. There was no flash in this kit! Pristinely Clean! So I carefully removed all the parts from the Sprues and cleaned them the usual way. The Model went together in a day and was left over night to cure. The following day I got stuck right in and started air brushing. The actual Narcissus has a Matt Finish but I gave mine a satin one. I weathered Her much more than how she was depicted in the first film. She looked more weathered and beaten. To achieve the effect I lay down some satin enamel black and then I applied an X-2 and an XF-1 50/50 mix and airbrushed until I had achieved an effect that I was happy with. The Decals went down a treat. There were no issues with them whatsoever. Beautiful! So that basically was that. I referred to my Book of Alien- Titan Books- and improvised the rest. For my Bigger Narcissus I will refer to the contemporary reference that has take over forty years to be officially published and photographs and stills that I have personally. This is a Lovely Little Model. An Enjoyable Build but way to expensive for the estimates are Stratospheric considering when I bought mine She was £26.00!!! Crazy Days, Crazy Prices! 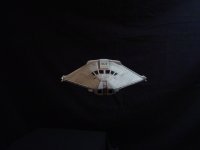 Thats Very Kind of You

Staff member
Always wanted one of these, and you did an excellent job!

I love that design. Turned out really great.

Thank You! It’s the Bigger One that’s going to be a Challenge!